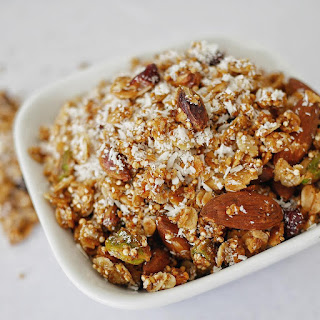 I have been making my own granola for a while now, much preferring both the taste and sugar content compared to store brought versions. I also really benefited from my lactation granola whilst breastfeeding.

On a recent holiday to Mumbai, whilst at breakfast at the famous Sea lounge in the Taj Palace, I tasted the most delicious freshly made quinoa granola and could not wait to add this great protein addition to my version.
A slightly longer method than normal as you first need to puff the quinoa up in a dry pan but once this is done it as simple as pouring the rest of the ingredients in, mixing and baking.

I hope you all enjoy both making and eating this great granola.

Posted by rupeat at 12:11:00 am
Email ThisBlogThis!Share to TwitterShare to FacebookShare to Pinterest
Labels: breakfast, Breakfast Inspiration, brunch, granola, snack