Ikos knows how to make it a wonderful holiday for all ages, but I feel they have paid special attention to their younger guests.

Starting with check in, along with our glasses of bubbly, both the kids were also given their own apple juices, crayons and ikos colouring pads to keep them entertained whilst we filled in a few forms, from the comfort of our sofa. 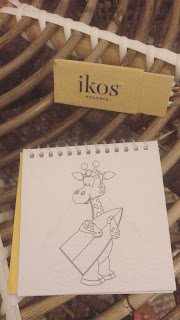 The check in set the tone for the rest of our stay. My little ones are 4 and 1 years old, so in terms of baby equipment in the room I personally did not request or need any but I am sure the hotel would be more than willing to provide you with bottle warmers, sterilisers, bath baths and monitors if you asked. We were also given a cot in our first room and since both of mine co- sleep they just thought this was a really fun toy to play with, it was however very clean and well padded. Sometimes I find hotel cots are really thin mattress, suffice to say no one slept in the cot but it looked great.

The main reason we ended up having two rooms was the first did not have an actual bath in it, which was surprising for a junior suite room in such a large resort with a large bathroom. My youngest is not a fan of showers and too big now for a baby bath so when we explained this situation to reception, Panos at Reception,  kindly upgraded us to a one bedroom suite instead which did have a bathtub.  To read more about the rooms please click here

There are two main kids menu - a toddler menu which I actually think should be renamed a baby menu as it’s all purée food, which chefs will freshly prepare for your baby. Again as mine are too old we did not try this.

The main kids menu however is the same, in all the restaurants, pools, beach and room service. It has a few healthy options such as salads, grilled fish and chicken but is mainly pizza, pasta, burgers and ice cream. I found it such a shame that so much effort had been put into the adults menus and the kids just had exactly the same offering, however on the upside the chefs will be happy to do anything for you.


At lunch and dinner I would often request an adults meal for the kids to eat, with a few adjustments or just ask the chef to create something I knew they would like to eat. Some examples as chicken souvlakia with chips, butter prawn pasta, chicken and prawn paella, chicken noodles. Mylotopia the dine out restaurant we went too was great as they had a kids menu which was basically this, adult mains slightly adjust for a younger palate and the kids loved their dinner here especially the home made chips. To see more about what the kids ate - check out this post. It would be amazing, if the themed restaurants would have a different kids menu to reflect the food they serve to adults and I did pass this feedback onto the management team so I hope it is taken onboard.


We only went to the buffet once for dinners and they did have a separate kids area with chicken nuggets etc for them also.

Room service was always fabulous, every evening we would order a warm milk that would be delivered within a few minutes to our door. Always at the right temperature and in an easy to pour teapot for minimal mess. Really efficient service and my little ones would always love the sound of the bell after we got back to our room as they quickly learnt it meant the milk had arrived.


Every highchair at Ikos is setup with colourful ikea cutely and colouring placemats, ideal for little hands and also since this is the same as what we use at home made them feel right at ease at the dinner table.

You can rent different size kids and adult bikes and also tricycles for younger guests. Both of mine thankfully were not interested in this which was great for us as it meant we didn’t have to lug bikes, helmets and tricycles with us, however they did look like lots of fun for the kids who were on them.


We did however take the hotel up on the mini adventure driving experience for the day and the hotel provided car seats( and installed them) for both of the kids.


We have never used a kids club before, not that I have anything against them but we have always been happy spending time with kids and without the stresses of day to day life they seem like so much less hassle. This time around on day 4, I went for a walk with the oldest(Big Bubs) and we went by the kids club building which is actual separate from the main buildings in its own stand alone area. As soon as the staff showed me the room for ages 4+, big Bubs threw off his flip flops and ran in, leaving me to fill in his forms and wonder back to my room feeling slightly deserted. I went back after two hours to collect him and he asked to stay for longer, I think that alone is a testament to how good the kids club is, or how boring we are as parents.

He spent the last three afternoons at kids club and to be honest if he had his way would probably have gone mornings too. Most of the staff are British and it split into two sections, one being for under 4’s and the other side over 4s. Both areas were really well equipped with lots of toys, soft play areas and outdoor playgrounds too. The outdoor space you can access at any time too without having to go to a kids club session. Unfortunately the youngest Bubs spent the holiday with a huge phobia of any adults who were not me and her Papa, so despite the hotel offering us complimentary sessions for her to join the kids club she did not join in on the fun. Over 4’s are free, however as we went the week before half term the hotel was still very quiet but I was told the following week most of the sessions had very long waiting lists so it would be best to pre book. Under 4’s are charged at around €35 a session or €50 for two sessions.


They also offer a beach minding service free for the first 30 minutes, we did not spend that much time on the beach so did not end up using this but the kids did play with a few of the beach toys they had available too.


There is also a nightly kids disco, that we thankfully never attended and a movie night once a week too, the disco however starts at 7pm and we would normally be getting ready for dinner around this time so it never worked out for us.


One final note on the kids club that I also thought was great was that a lot of the babysitting is done by kids club staff. This means the kids are already used to them, making it easier for mum and dad to have a night off. Hopefully little Bubs is a lot older on our return trip and we can make use of this service too.

All the staff are great with the kids, and despite us having one child who wouldn’t let anyone near her, our other/favourite child loved all the attention he got. By the end of the week so many staff members knew his name, he felt so at home in the hotel he would often leave his hat/ slippers just lying around and they would always be returned to us.
From small things such as being able to order his own milkshakes and ice creams, to the high fives and in depth conversations about his toys.


At check out Effie the hotel general manager presented both of them with a present, a unicorn teddy bear and submarine. The kids had an absolute blast and the smiles they had at check in only grew during the week to the final huge smile at a surprise presents upon check out. 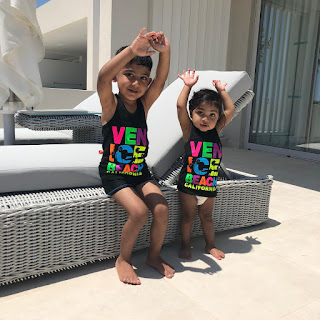 To see more details on the rest of our trip check out our additional posts: