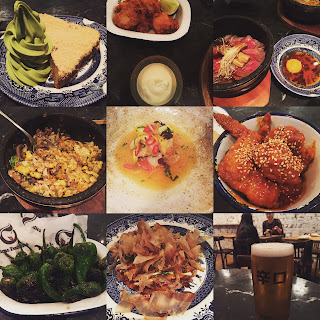 This is my first ever restaurant review,  when me and Mr S were first dating we loved trying out all the new places in London and being really up to date with the amazing food scene in London. In fact our table names at our wedding reception were the names of our top 40 favourites.

However in recent years we find we dine out less and on weekends tend to stay closer to home rather than going into central London when we do go out to eat; but since we have been having some lovely weather in London lately we have taken it as a great opportunity to go into Central more and show Bubs the sights. Last weekend he really wanted to go visit the museum to see the dinosaurs, so off we went to the Natural History Museum and the Science Museum. We booked Shackfuyu for an early dinner but since Bubs had fallen asleep after all the fun he had at the museums we were actually an hour early for our reservation. The restaurant was really accommodating in still giving us a table with enough space for a pushchair so a great first impression.

For drinks Mr S order an Asahi Super Creamy - which he said tasted like a normal asahi. I went for a mocktail Harkin Ichigo' which was delicious and refreshing especially after walking around in London on a hot summers day. 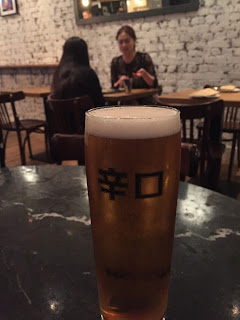 The food at Shackfuyu is based on Japanese inspired dishes, the same as Bone Daddies other restaurants, with the main influence being Yoshoku. A specific type of Japanese cooking which are Japanese forms of western dishes, such as the deep fried chicken cutlets in a katsu curry. The menu however was varied and you could also see other influences such as Spanish tapas and Korean flavours included.

The dishes are designed to be shared on the table and it was hard just being the two of us eating not to over order as I really wanted to try most things on the menu.

For our 'starters' we had the Prawn Toast masquerading as okonomyaki. After having some delicious okonomyaki whilst in Japan I was intrigued how this would work as a piece of toast but it did, delicious thin crispy toast, topped with prawns plenty of the traditional sauces and finely sliced bonita flakes. Very authentic and it comes pre-sliced so perfect for sharing. 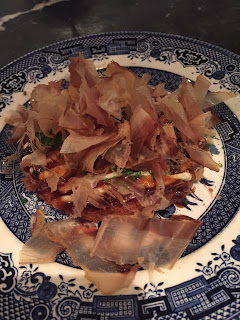 Grilled padron peppers which were on the specials menu, again a favourite of mine when in Spain for tapas and these tasted great too, I did think the portion size though on these was too large for just two people to share, fine for a bigger table. 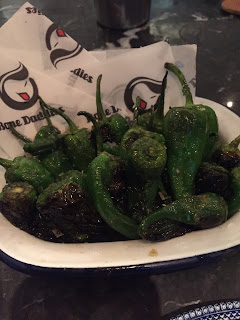 Korean Fried Wings - delicious and very moreish, one of my favourites and one of the most popular items. The sauce was perfectly balanced with spicy, sweet and tangy tones, very large wings also so lots of actual meat on them. 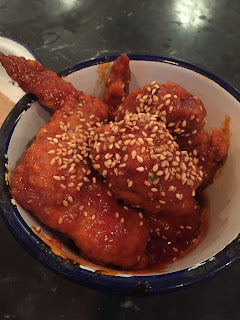 Seabass Ceviche - this was tasty especially the dressing but not the best ceviche I have ever eaten and one of the dishes I do not think I would order when I return, because there are still plenty of others on the menu I want to try. 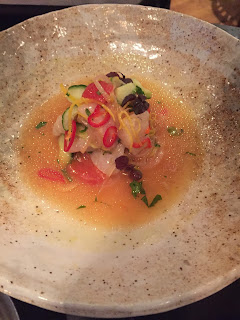 For our 'mains' we order the Hot Stone Rice with sesame, chili and beef, this was a very hot stone bowl filled with brown rice, charred sweetcorn, veggies, minced beef and an egg yolk which is mixed once it arrives on your table. Really delicious and highly recommend this. 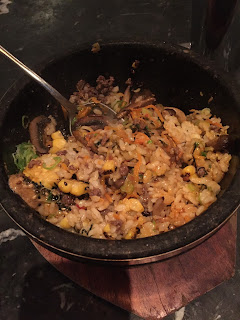 Another favourite dish was the Sukiyaki style Wagyu Pichanha - a dish of thinly sliced wagyu, sweet grilled onions and mushrooms again served in the hot stone bowl which continues to cook the rare beef. The way to eat this is to first mix the egg yolk sauce together then take a piece of beef and dip into the sauce, beautiful melt in your beef with a unique salty, sweet dipping sauce. 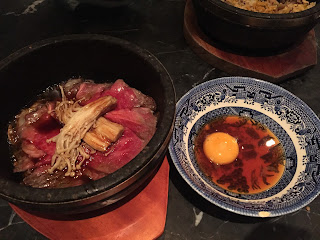 Monkfish cheeks in a chili batter with a lemon mayo reminded me of Indian fish pakoras especially as the batter had a big chili kick to it.
Out of all the dishes I would say the chicken wings, rice bowl and wagyu beef were my favourite. 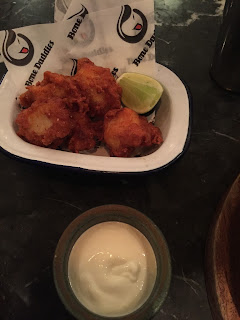 For desert at Shackfuyu there is only one option, Kinako French Toast with soft serve ice-cream, and they probably do not need any other options with how good this tastes. Again I haven't had matcha soft serve since being in Kyoto so I was really looking forward to this and it was just as good as the version there. The french toast has a caramelised almost creme brûlée topped with powdered sugar, perfect textures of soft moist bread, crunchy topping and creamy ice cream make this the best end to the meal. 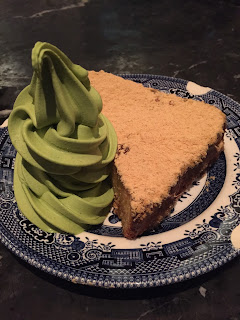 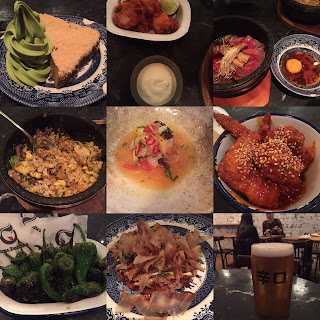