Top Tips for Travelling with a Baby or a Toddler 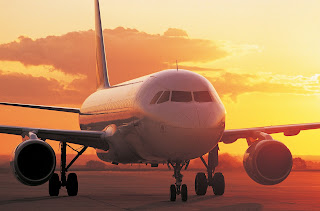 Following on from my post on packing I have also put together some of my top tips for flying with your little ones. Although we are far from experts on this Bubs has done quite a few trips already and has a few more planned before the end of the year so anything I can do to make these run smoother for us I try.

Generally Bubs is a good traveler and so far has enjoyed all his plane journeys, taking it all in his stride. The majority of the flights he has done have been long-haul and he is often better behaved than some adults on the planes. Its not easy to take babies or toddlers on long journeys but it is worth doing for the final destination. Obviously all children and adults have good and bad days , so one horrible travelling experience with a baby does not mean they will be like that forever on planes. Try not to be put off and explore the world together.

Tip One
Flight Times - When possible try to book night flights, our first flight together at 9 months flew overnight and he slept for around 10 out of the 12 hours both there and back. As kids get older and can be entertained with toys, films etc this becomes less important; but sticking to some kind of routine with younger babies can help. Putting on their favourite pjs, taking a blanket from home, warm milk in a bottle to help them settle in for the night.

Tip Two
Seating - Again as much as possible try to book the bulk head seats. I am a big fan of British Airways chair option for under 2's, something I am not sure other airlines offer which makes it so much easier as the bassinets are really only suitable for very young babies. The extra legroom is also great with toddlers in these seats giving them more space to explore.

Tip Three
Toys and Entertainment - Some of the best toys to travel with for babies are teething toys, ones that can be clipped onto you or them so they do not fall down and get lost between the seats. For toddlers - sticker books the 99p shops do great little packs that they can go crazy with.Drawing tools, preferably pencils or crayons so they do not end up with pen marks everywhere, lego, small reading books. Basically anything that can keep their attention for a prolonged period.
We also brought Bubs some kids headphones but on our last flight he was not to interested, will try again this time. Not sure if he would watch a whole film yet but he would be more than happy to watch a million episodes of Peppa Pig.

Tip Four
Snacks - Lots of them is my key tip here, always be prepared for delays, longer than anticipated transfers and waiting around in queues. If nothing else can entertain them a packet of raisins normally will.
Individually packed items, small ziplock bags I find work best, anything that makes it more interesting to get the snack out to is also great in passing the time. Some of Bubs favorites include raisins, popcorn, rice cakes, breadsticks, oaty bars, fruit chews and crisps. Whatever is their favorite make sure there is plenty of it.
It also really helps during take off and landing to feed, either breastfeeding, a bottle of milk, beaker or  sports cap bottle as the swallowing helps to release some of the air pressure on little ones ears. We also give Bubs a dummy for take off and landing now that he is older and does not drink milk as often.

Tip Five
Surprise - Try and keep one weapon of combat a surprise, great in emergency breakdown situations or as a treat for being extra good on the journey. A new small tool, a new book, a mini packet of sweets anything you think will work on your child.

Tip Six
Preparation - Be extra prepared, always carry more clothes, snacks and milk than you need. Not only is this reassuring to you in case anything unexpected occurs but it also means you can handle most situations travelling may throw at you - literally in some cases.

Tip Seven
Time Zones - When doing long haul, pack meals, feeds and change of clothes according to your babies normal schedule, helps you with a guide on what to take and helps the baby to keep to the routine you are used to hopefully making the journey easier. Can then begin to adjust them to the time zone once you are arrive at the location. So far we have mainly traveled east with Bubs meaning he is going ahead in time so we have tried to be flexible with naps and let him sleep later meaning he has not found the readjustment on return so bad. However travelling west this would be the opposite and harder to get them in and out of routine so maybe a little harder with younger children.

Tip Eight
Hiring - When it comes to baby 'stuff ' try to hire as much as you can on the other side to avoid packing and taking this along when travelling. A lot of companies now offer this service such as Tots Too, whose properties have a lot of equipment included as standard. Otherwise ask your hotel concierge to help source some of these items locally. If staying in a hotel instead of a larger apartment we also normally rearrange the furniture to make it more baby friendly, i.e move coffee tables near the walls to give them more space, move wires out of the way and cover up plug sockets.

Tip Nine
Flexible - Before when we would go away as a couple we would try to do as much as we could in the days we had in a country. For example our first day in New York after landing early afternoon at JFK we went to Times Square, Ground Zero, Wall Street, Staten Island Ferries and watched a show on Broadway. Now we will plan a rough itinerary of what we want to do and see how things go on the day, always leaving extra time and being flexible in moving plans around.

Tip Ten
Enjoy the moment - Holidays are just the best for quality family time away from the mundane day-to -day activities and a perfect chance to give your full attention to each other.
We find each time we go away. even the first time when he was a lot younger Bubs learns and develops so much in such a short space of time. I did read something once on some of the studies conducted and how being in a holiday environment really benefits babies, toddlers and children but just from my own trips each time we see such huge changes.
So once you are over the stress of packing, travelling, checking in, making sure you have everything you need under the sun make sure you take a few minutes to just appreciate. Take in the beauty of a new location, taste new foods and do things out of your comfort zone.

Create memories you will all remember forever and capture all these moments because before you know it the sun will set and it will be another day and your little one will be one day older, wiser and richer with worldly experiences.

Biscoff Barfi After a recent vote on sweet treats to make, barfi came out top, one of my most popular recipes without a doubt is my  Chocolate Crunchie Barfi , which I know a lot of love remaking for special occasions including Rakhi. Rakhi is a festival often celebrated in summer which marks the relationship between siblings, traditionally a sister will tie a string onto her brother and offer him something sweet to eat with it, in return she will receive a present or money. The significance behind it being he promises to look after her for the year to come. We celebrate this every year and so do the kids, which is lovely to see, they both exchange rakhis but much prefer chocolates to barfi. Stay tuned for some kid friendly rakhi treats next week. This recipe for Biscoff Barfi is not very traditional, or prepared in a traditional way but its simple to make and the taste is amazing!! Even if your not a fan of biscoff as a biscuit or spread, in this form along with the to