Bottles, Beakers and Babies No More 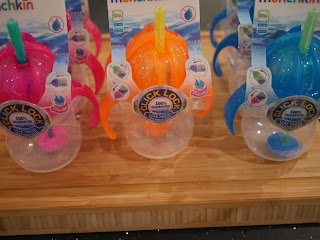 This is a post all about moving your little ones on from the bottle to a beaker or a cup, especially for that evening milk feed that so many of them rely on to get ready for a wonderful night of sleep.
I have done a little review on the different types of beakers I have tried and those that have worked best for us. Also please make sure you read to the end in order to enter our first ever giveaway!

I have been doing a lot of research i.e ordering lots of beakers on amazon and testing them out on Bubs over the last few months as he was due to turn 2 and we ideally wanted him to stop the bottle by then.

He did not take a bottle until very late - around 9-10 months old so I though it would not be that difficult to get rid of it especially since he has always had his water from a beaker and his daytime milk since he was a year old in a beaker too. The evening bottle though was not the easiest to get rid of and partially I think because of the alternatives available. Ideally I would want him to drink his milk from a cup but this would involve a change in his bedtime routine and coming back downstairs to drink it.

My main criteria for a beaker is for it to not leak, be easy enough to drink from and easy to take apart and wash.

One of his first ever beakers he used at 4/5 months is the Tommee Tippee beaker, this has been great not only for water but also milk. 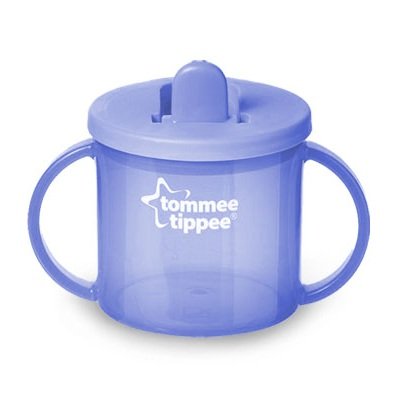 It is also the beaker used at his nursery so he was very used to it but I found when it came to bedtime due to its open flow mechanism and Bubs still having his feed in his bed milk often ended up spilling on his face or him. This led to my search for the perfect evening beaker to meet our needs and several Amazon orders later I found the perfect one from Munchkin. 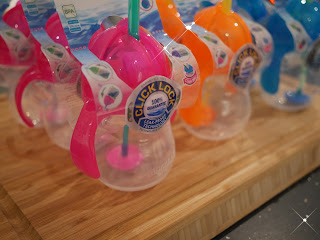 This post is not sponsored in anyway I just wanted to share my views on this and how useful we have found this particular beaker.

Firstly it is non drip, you can easyily know its is correctly closed as it clicks into place and also it is simple to open up and clean. Some beakers I find need super human strength just to get the lid of. There is a soft flexible straw but the really genius part is the straw is attached to a weight meaning whichever angle your little one drinks from they will always get milk unlike other types I have tried that use a straw and the handles mean they find it easy to hold independently. It also means they are able to finish every last drop in their beaker. I have found this has made the transition from the bottle a lot easier, it comes in 4 different colours. I loved it so much I've order lots of them to give friends and family with little ones too. 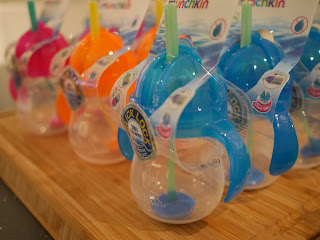 Some of the other beakers we tried included: 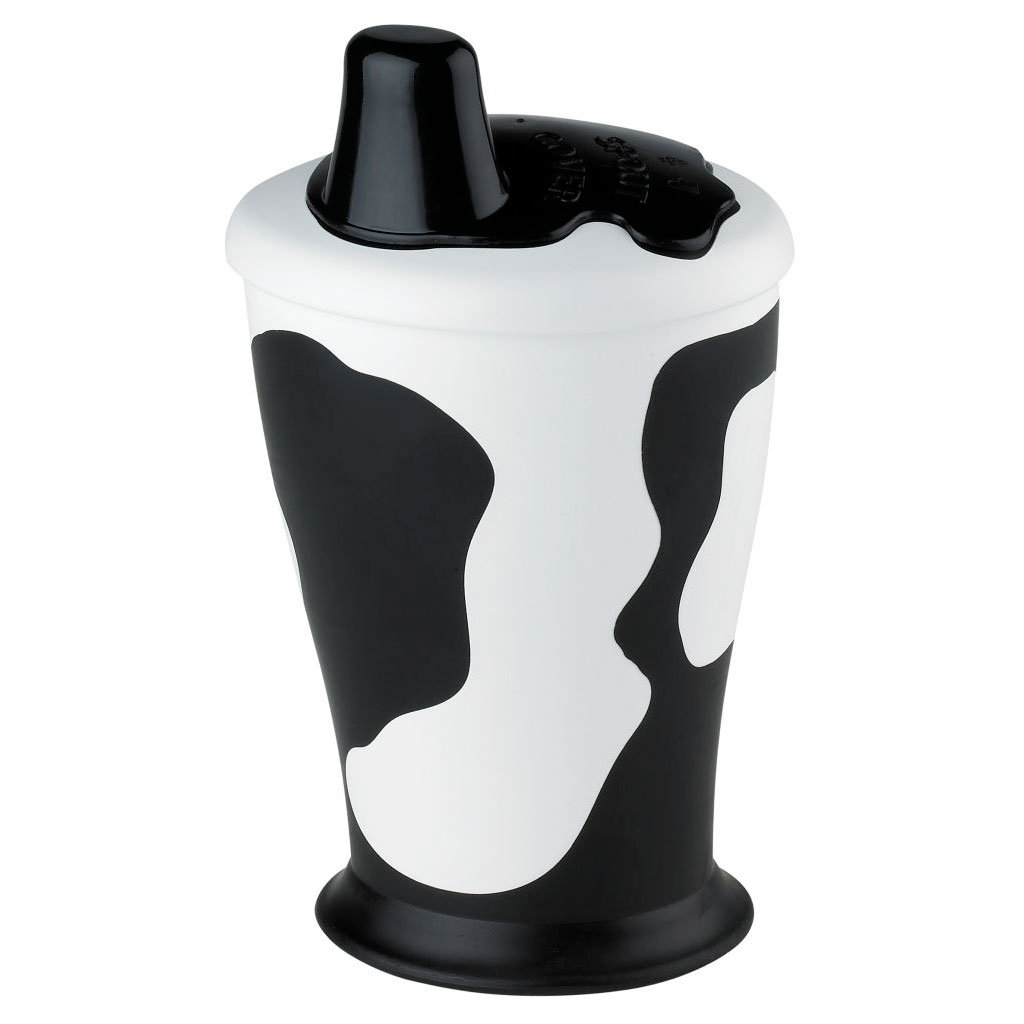 Pros - Non spil due to the rubber effect on the outside of the beaker, cool design, easy to clear as only two parts.
Cons - The valve system made it hard work to drink milk out of so not great when its late in the evening and your bubs is cranky. Hard to tell how much milk is remaining and the lid is difficult to take off. 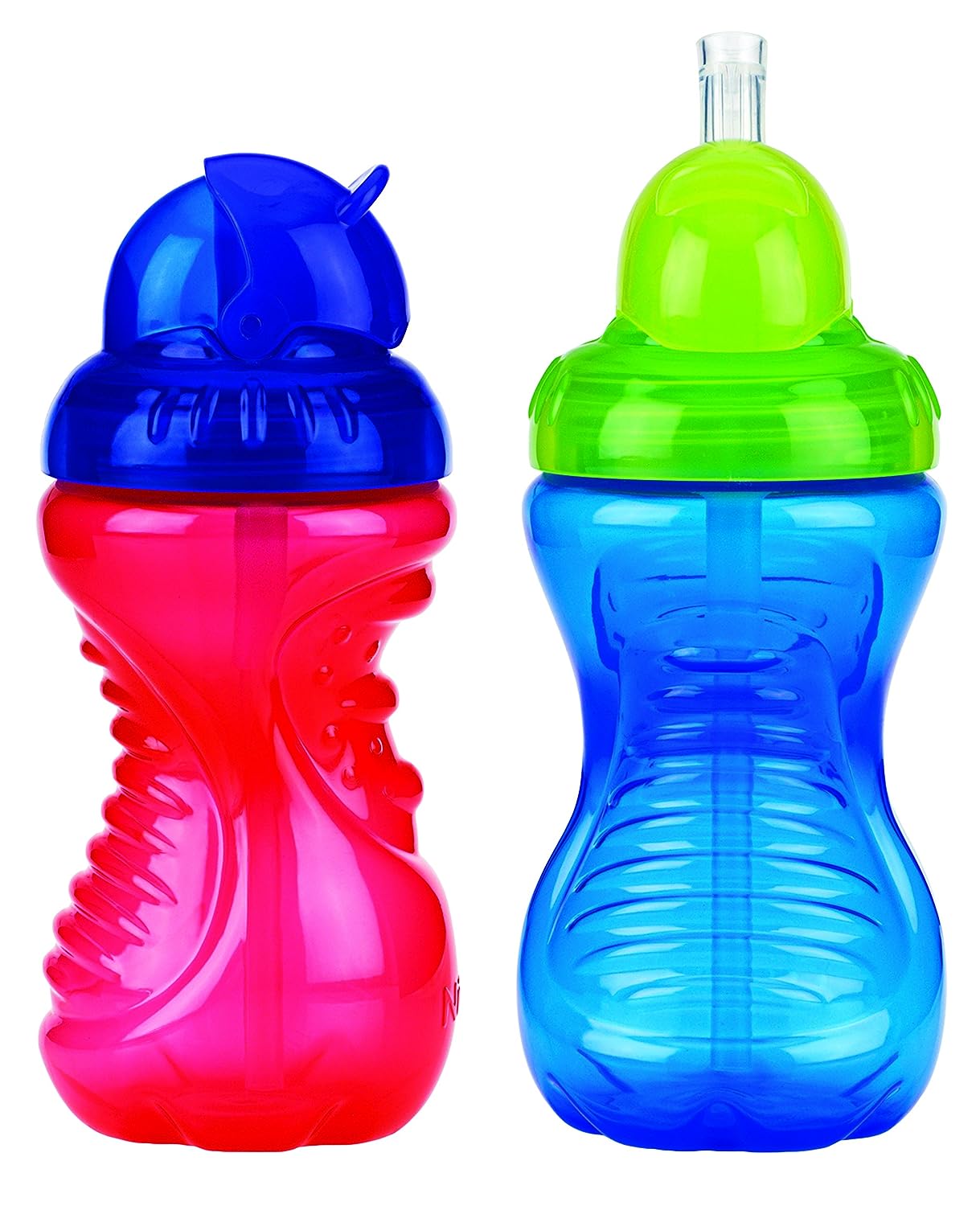 Pros - Click system, easy to open and close, I find all of the Nuby beakers great for water during the day especially when he is running around can just pick it up and help himself but the flow is quite a lot for bedtime
Cons- Hard to drink unless sitting up, milk does drip out and after a while and few times removing the straw to wash it does seem to not pop up correctly. 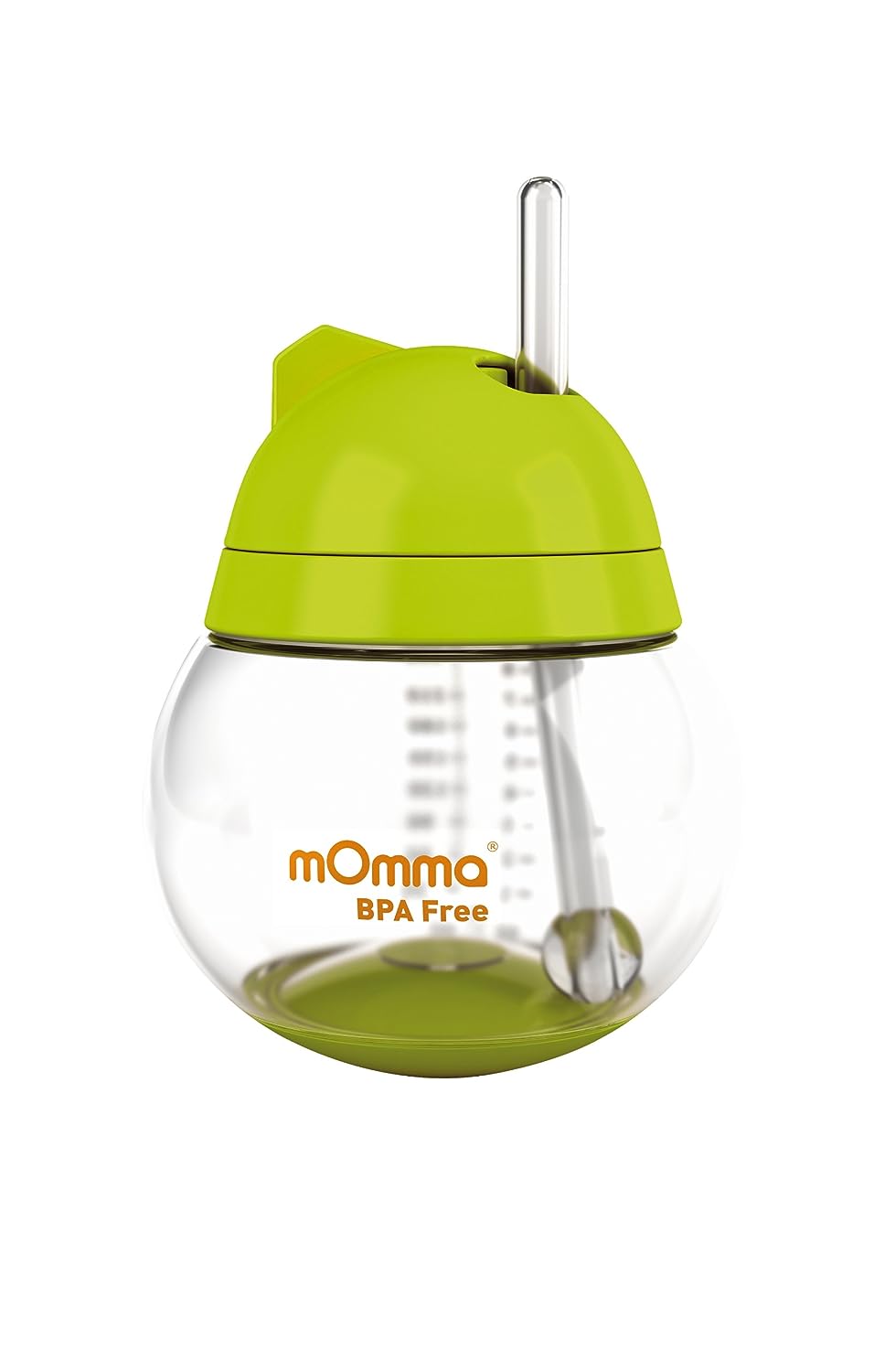 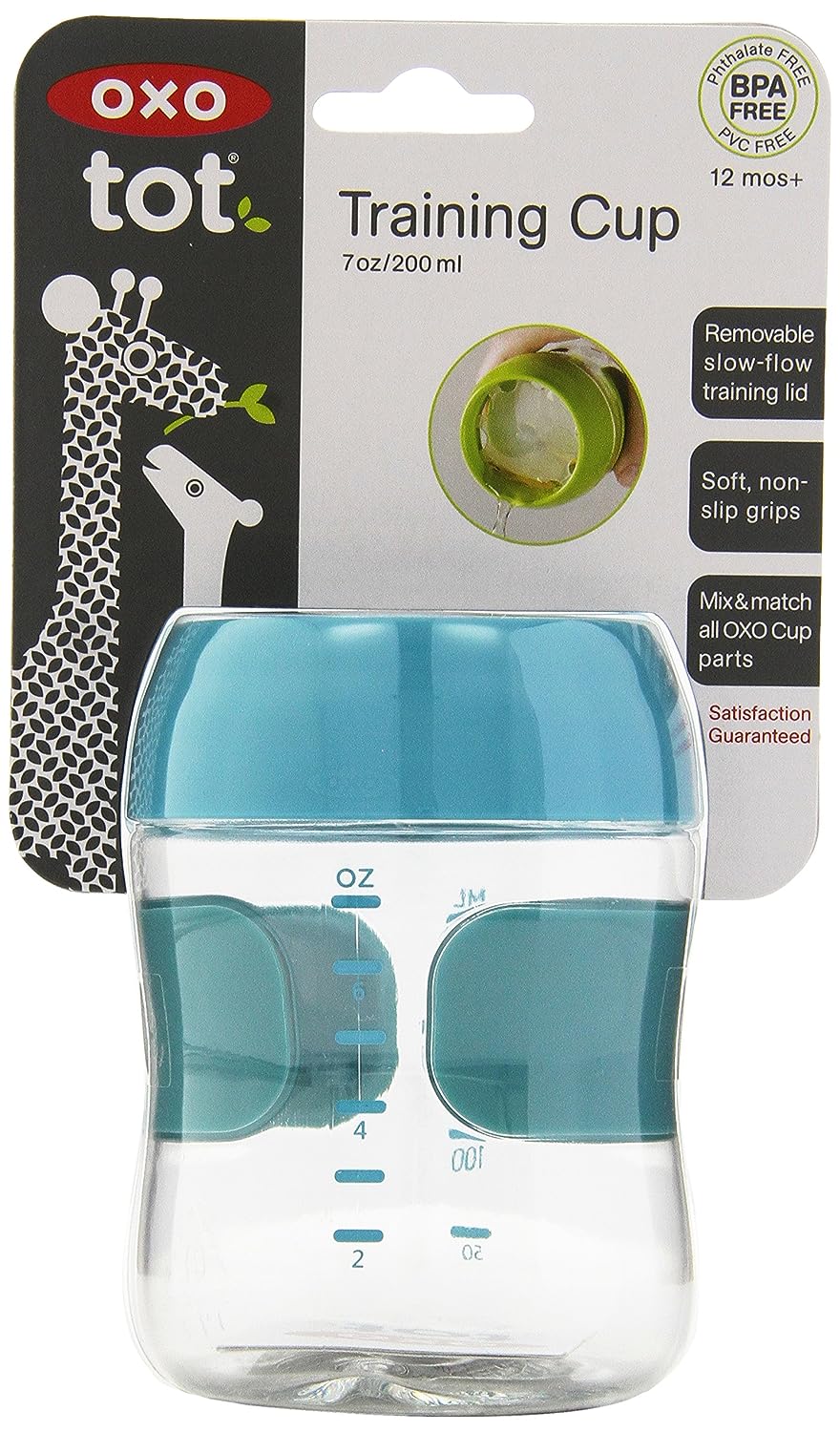 Pros - I think this is great trainer to encourage them to drink from an open cup at the table as it is easy to hold and can be drunk from any part of the cup
Cons - Does not take them long to work out by turning it upside down the water will flow out, too easy to spill the liquid especially if drinking in bed. 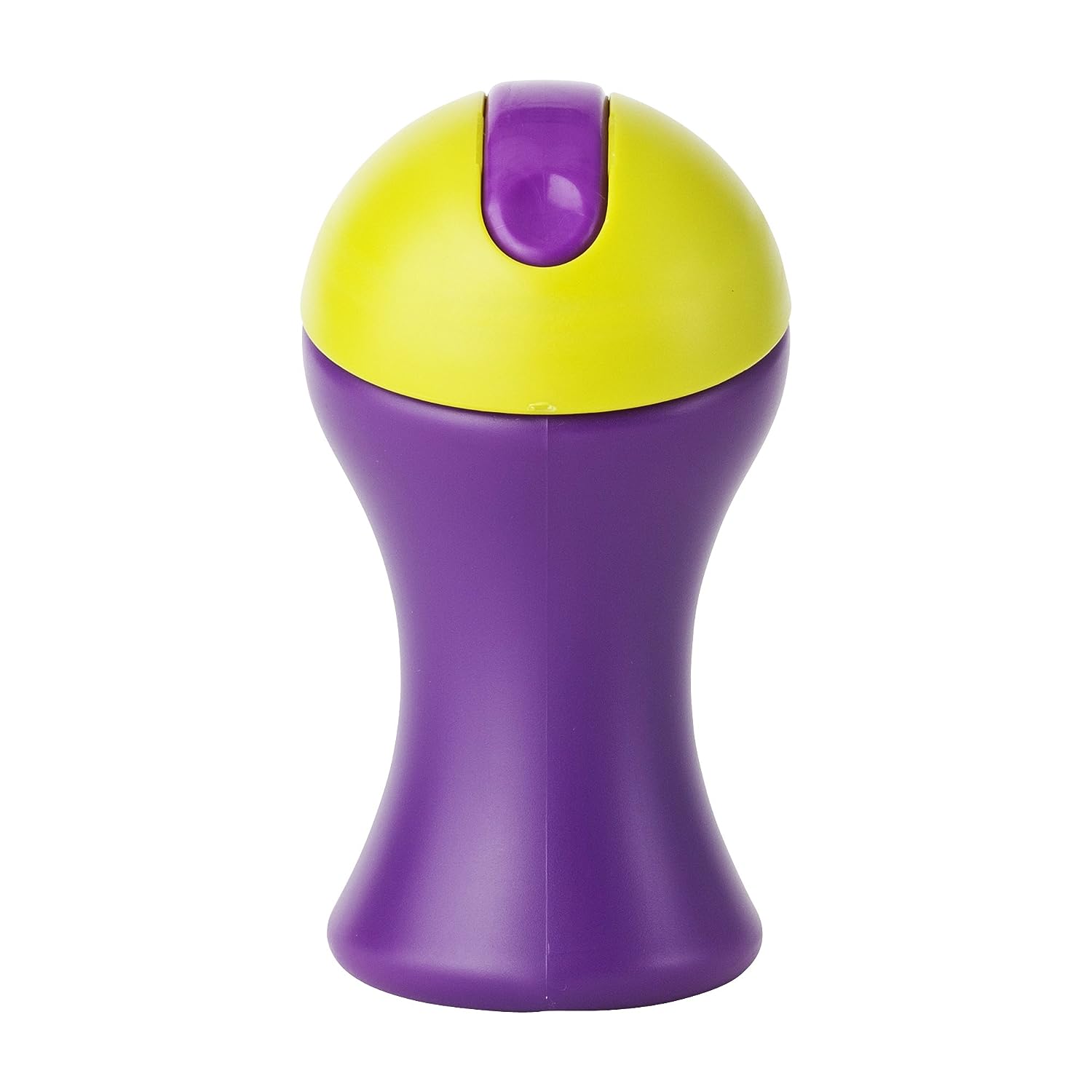 Pros - None really - really did not like anything apart from the design and colour on this one
Cons - Hard to hold for little hands, the straw opens up but it feels like it is the wrong way around, difficult to remove the lid and not easy to clean or see the parts inside. 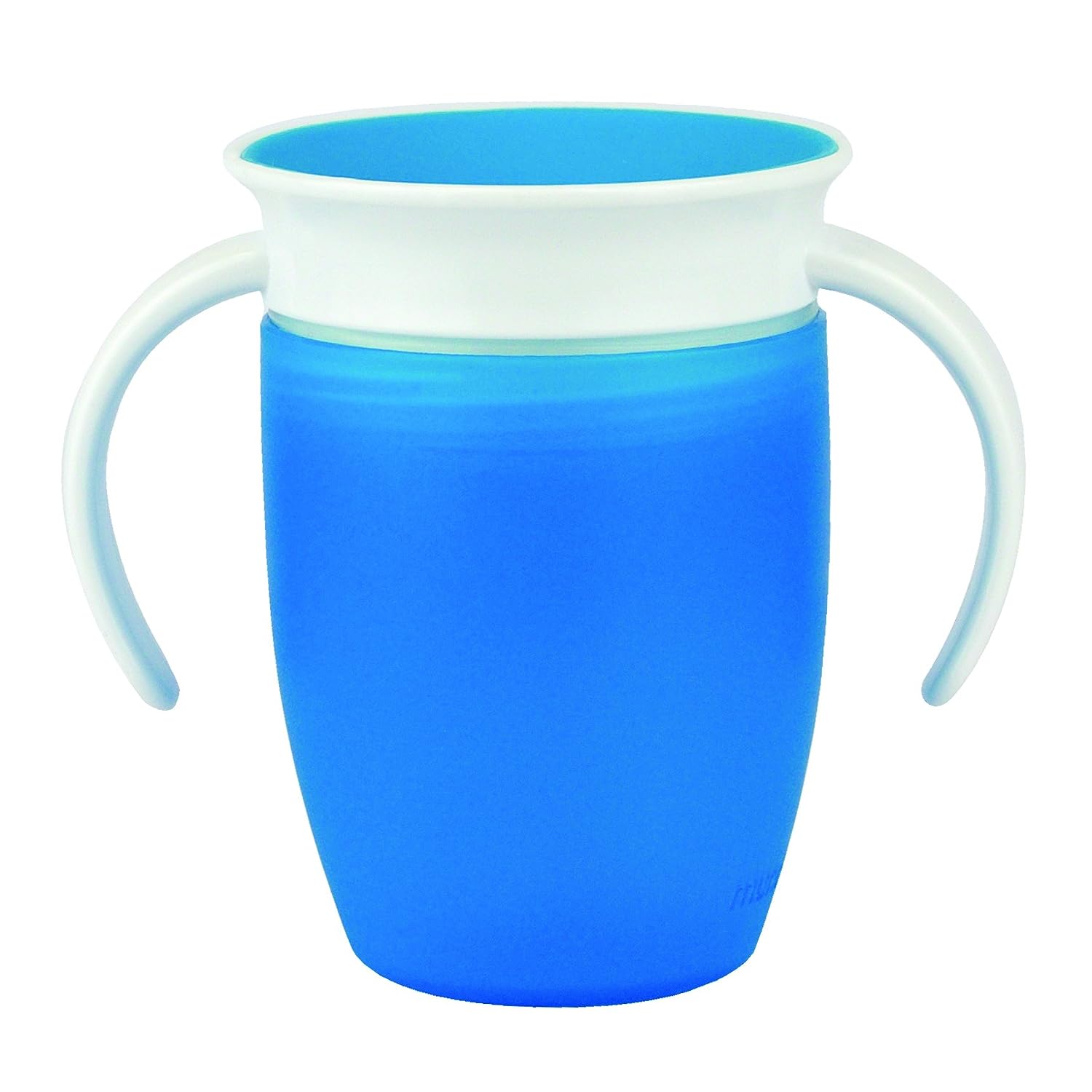 Pros - Easy to hold, can be drunk from any part of the cap, easy to open and clean, does not easily leak. Great cup for water when playing during the day.
Cons - Found it took Bubs a lot longer to drink his milk from this cup and he got quite frustrated it was not coming out as quickly as he would have liked.

Ultimately each child is different and they all have their favourite cups I just wanted to share some of experiences we have had along this journey. Bubs is now mainly bottle free ( unless he is at his grandparents and convince them to give him the bottle still), we also went away to Rome recently and I risked travelling without one which was fine in the end. I think turning 2 has made him think he is a lot older and no longer needs it. Until the next stage of getting rid of the beaker for now we will be using the Munchkin Tip n Straw each bedtime. 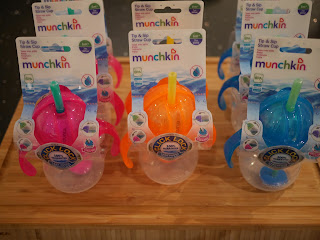 GIVEAWAY - For a chance to win one of my and Bubs favourite cups - please enter the following competition by contacting us using any of these methods - UK only
1. Via our Facebook page - https://www.facebook.com/rup.eat and comment on our giveaway post to leave your details.
2. Follow us on our Instagram page and comment on our giveaway post with your details  - @Rupeat - https://www.instagram.com/rupeat/
3. Comment below with your name and email to be in win a chance to win
4. Winner will be announced next Sunday