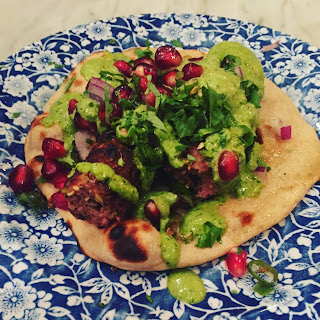 The Tandoor Chop House has opened recently near Charing Cross in London, the restaurant philosophy is to combine the traditional North Indian eateries and tandoori menus with that of a classically British chop house offering high quality cuts of meat. We visited over the weekend for one of our annual family Christmas dinners. The little one was lucky enough to get tickets to watch Peppa Pig in the theatre with his Auntie and Uncle as his Christmas present this year, a great production from what I heard that was enjoyed both my him and the adults. We met up with them after the show for lunch and were able to book a table the day before at the Tandoor Chop House. 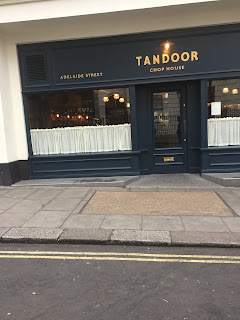 We went on a Sunday afternoon for a late lunch and the restaurant was fairly but not completely packed, the location is slightly hidden away from the main street so less chance to discover it by just walking past which is a shame as it was great.

Similar to other Indian restaurants that have opened in the last few years in London such as Dishoom and Gymkhana both in terms of its striped down relaxed decor which is heavily influenced by their counterpart originals back in India and also with regards to the condensed menu serving significantly less dishes than your local curry house on the high street.
Tandoor Chop House gets the balance just right in terms of a relaxed atmosphere but still provided exceptional quality and cooking of the food. The menu is divided into 5 main sections, snacks, tandoor, sides, naan and dessert and the great thing about going with a large group is I got to taste it all pretty much.

Drinks are also a big of the dining experience with a whole section dedicated to Gins and several specialist cocktails, including the Strand Spritz below, the winner however was one of the special cocktails of the day the - Punjabi Sour - a twist on a traditional whiskey sour. 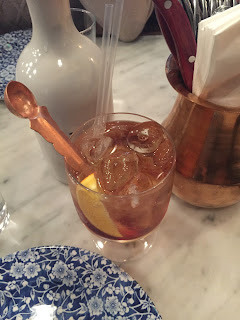 I loved the attention to detail including all the copper ware and these traditional clay water bottles. Similar to restaurants back in India water is presented as soon as you take a seat at the table to in a way welcome you as a guest. 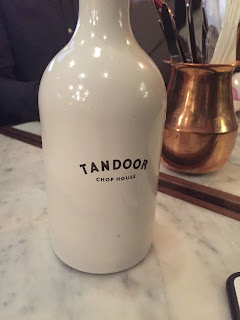 For starters we tried all 5 of the snack items, my favourite personally being the Seekh Kebab roll and Bhaji Onion Rings. Both of these were cooked perfectly with the right balance of spice and heat. Also great when the chutneys add so much depth to the dishes and not merely there as a garnish. The Keema was good but a bit too much cinnamon for my liking. Both the fish dishes were great but maybe with it being December and having come in from the cold the lamb and onion rings stood out more, the Tuna was very refreshing and similar to a chaat in flavour.


The snack portion size is small so for a group of 6 we shared around 8 of these for a starter, guess it just depends on how hungry you are and we were all very hungry.

For mains though the portion sizes are very generous, in particular the steak and the chicken which one portion was more than enough to share between us. My ultimate hero though out of the entire lunch were the juicy, tender, still pink but charred crispy fat lamb chops, very delicious.

We also shared a black dhal which was ok, not spicy enough for me but I liked the smoked undertones.  I also tried all three naan, my favourite was the garlic, cheese and chili one. The bone marrow naan did not taste much different to the butter naan.

Service was great, no issues with ordering more drinks or extra food and its always a good sign having an open kitchen to be able to see how happy the chef is whilst cooking your dinner.


My little one is over 2 now so he is fine sitting in a normal chair or on a bench as the restaurant did not yet have any highchairs if you have a baby, they did say these were due to come in shortly. More of an issue is no baby changing, again my one is old enough to a)not be in nappies and b)get changed standing up but just to be aware off. Its not marketed as a child friendly restaurant and is more of an upmarket place but Bubs is quite well behaved so this was not an issue for us but some people may not feel comfortable taking small children. It depends entirely on you, its not very large either so there is not any space for them to run around. They were very accommodating to our pushchair as Bubs was asleep when we got there and also reserved us a booth so he could sit comfortably on the bench seating too. I also think the Gunpowder fries we got on the house were due to his cheeky smile at the waitress when she tried to pick his plate up before he had finished.

For desert we choose the ice cream and the halwa pudding which I thought was a very clever desert and a great way to round of the meal. Gajjar (Carrot) Halwa is a traditional sticky Indian desert and this was baked into a sticky toffee pudding, the perfect combination of both Indian and British which summarise the ethos of the entire restaurant and its concept.

I would be more than happy to go back to Tandoor Chop House and look forward to seeing how the menu evolves.