August 26, 2017
For Fathers Day, this year Mr S said he did not want any presents, pretty much what he says every year. Normally advise which I ignore and still buy him something, last year I got him and my dad a whisky tasting kit I put together for them to have a whisky tasting evening which never did end up happening.

Other presents over the years have included ties, belts, wallets, beard trimmers, personalised keyrings, numerous ' Not on the high street' prints etc. We have been together a long time now and after all those birthdays, anniversaries, christmas and now fathers days to be honest there is not really anything he needed so I decided for once to listen to him and let Bubs give him the beautiful creations he made at nursery instead for fathers day.  One man shaped keyring, and voodoo doll shaped card complete with paper tissue tie - everything a Papa could ever want for.

Instead I decided to book us a family brunch at Roka, a restaurant which I have been to several times before but Mr S has not had the joy of sampling yet. Knowing he loves asian food I knew he would be happy with this as a present instead and it meant we got to enjoy fathers day afternoon together in London.

I chose Roka Aldwych as I had heard great reviews from friends and it was a lot closer to our home than the other branches, as it was a Sunday we choose to drive into London and got parking right outside the restaurant which was a bonus given the heat that day and the large belly I have being carrying around this summer. 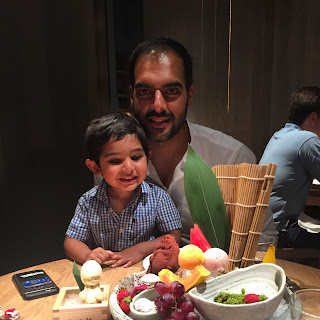 The weekend brunch at the Aldwych branch works by having a selection or starters that are brought to your table from which you can eat as much as you like just by ordering more. You are then able to choice one main from the robata or main kitchen menu followed by the desert platter for the table to share. I understand other branches may do things slightly different with a buffet option instead.
With regards to drinks you can either have unlimited wine throughout or a welcome Belini instead with no alcohol included, they were more than happy for me to swap my Belini for any mocktail on the menu instead, just one of the ways the restaurant was extra accomadting to me being pregnant.

For starters we shared the following:

The stand out items for me particularly were the dumplings and tempura. I felt the Sushi and Sashimi selection for Mr S did not reflect the best options available from the a la carte menu, they were again great with me being pregnant and brought me my own non-raw fish version of both the sushi and sashimi.


For mains we choose the Beef Sirloin and Baby Chicken, both delicious the chicken in particular was grilled with a salty child miso sauce on top and had a really well balanced flavour along with crispy chargrilled skin. 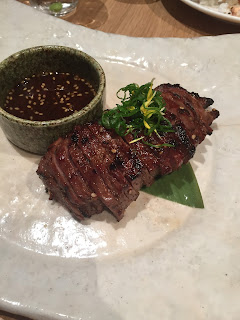 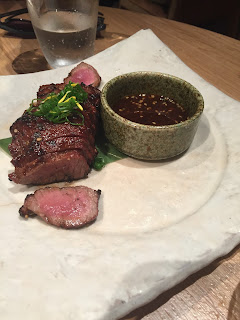 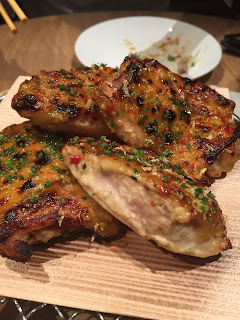 Now I was impressed with the amount of effort they had gone to for me being pregnant, but I was even more astounded by how they cater for kids.

After I booked the table, I contacted the restaurant to ask if it would be possible to order off the a la carte menu for Bubs as I knew he would be happy having rice, noodles, grilled fish etc but not so much with the sushi, sashimi and tempura, the restaurant replied saying they unfortunately do not offer the a la carte menu along with the brunch but there would not be any charge for Bubs to dine with us, I therefore assumed he would just be sharing our food with us. 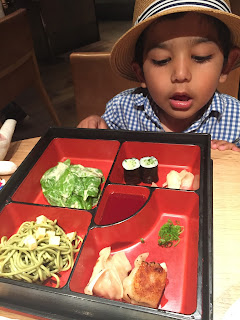 This however was not the case, Bubs first received his very own Bento Box for starters containing a Spinach Salad, Green Noodles, Dumplings and Cucumber Maki. For mains he could then choose one main from the adults menu - he choose Teriyaki Salmon with Sticky Rice and ate it all up so quickly I forgot to take a picture. And then for desert alongside picking at our desert buffet he also received his own Ninja Shaped Vanilla Ice Lolly.

I would not have immediately thought of Roka as being a child - friendly dining establishment but they were great with kids, all the staff loved engaging with him on his many walks around the restaurant and he was made to feel very special with all his own courses that were presented beautifully to him. We have been taking Bubs to restaurants since he was only a few weeks old but Roka has to be by far one of the best in terms of service, food and fun for kids. I would highly recommend it to any families visiting London and looking for a memorable dining experience for all.

To finish our meal we enjoyed the desert platter complete with Chocolate Buddha, Raspberry and Matcha Panna Cotta, chocolate truffles, exotic fruits, ice creams and sorbet. Again it was all finger lickingly delicious and we polished it all, not leaving a scrap behind.

Overall we throughly enjoyed our brunch at Roka, the service went above and beyond, the food was all delicious and ambience was perfect for a lazy sunday afternoon. After eating so much we spent the rest of the afternoon walking around Covent Garden before heading home to enjoy the rest of Fathers Day. 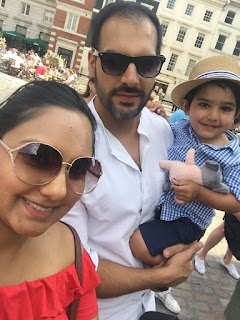