Potty Training In A Week 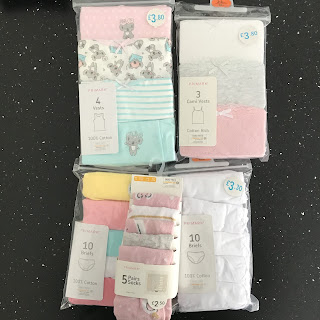 I’ve done this twice now, and like all the experiments I have done since having both of them, both times potty training were quite different. Shockingly, it seems that even though you may have the same approach, toddlers will behave differently. I am not sure if my results were different due to nature ( different sexes) or nurture (1st child vs 2nd child) but second time around, with a 👧 was so much easier.

All my potty training techniques come from the queen of potty training, my sister in law who had both of her kids out of nappies before 18 months. She is also the same person I went crying to when first time around, 👦 relapsed after 6 weeks. Which is fairly common but is also the reason I waited until writing up this post too.

Generally as a parent, I like to take the easiest road and nappies after around 18 months are to be honest the easiest thing, by that age most could probably change their own, if they were ever bothered by siting in their own 💩. They tell you when to change them; sit fairly still and you can even time their poop sometimes to know when to wait for it; for number one nappies you can normally change them standing up especially the pull up types. So I was never overly eager to potty train either time around, one of the big factors for me was that once I started I didn’t want to go backwards so it was about finding a window of a few weekends we were free. I also avoided doing it around any holiday times as routine and habits are normally the first thing to change.

The other factor that makes a big different is who else will be doing this with you, since both of mine were at nursery when they were potty trained I knew that being on the same page with them would be the most helpful, luckily they were and worked with me both times to ensure no mixed messages. The Nursery method is really similar, so no pulls up are worn, straight into real pants. To be honest, especially with my first one Nursery did most of the hard work, since that is where they spend the majority of their week. 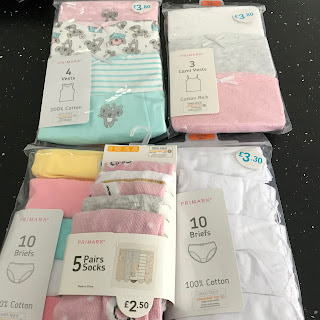 I don’t know if this method had a name but the key to it, is asking often, letting them have any accidents in real clothes so they get used to the icky feeling of being wet, encouraging independence and praising milestones.

If you are worried about your furniture or carpets, the dry wipes waterproof mats are great to place down while they are playing to save any accidents, or you could just use an old towel too.

Day 1:
We only day nappy training initially, not night at the same time. So in the morning take off their nappy, explain the fun of big pants, put some easy to take off leggings, joggers etc on and off you go. Keep everything else in their day the same, except every 10-15 minutes you have to go to the toilet, even if they don’t need to go. This is when the basket helps as you can give them a small toy or book to play with.
If you have any accidents, which you probably will, don’t make a big deal of it, just change them and explain next time you have to do that in the toilet.
Also when it does work, give praise, a sticker or sweet etc but again don’t make it a huge deal as you don’t want the reason for them going to just be the reward forever.
For naps on the first day we put a nappy back on but explained we only wear nappies for naps now.
Day 2
Exactly the same as day 1.
Day 3
The same as day 1 but you can start extending the time to every 15-25 minutes if you feel they are getting it. 👧by this point got it, and we thought it may have just been the luck of the day but looking back now she just figured it out preety quickly.
Day 4-8
Continue the same with reminding them every half an hour of the toilet but letting them decide if they need to go or not.
After around a week, they should start to give their own ques and let you know when they need to go. A gently reminder if it has been a while and they are too busy playing always helps too. 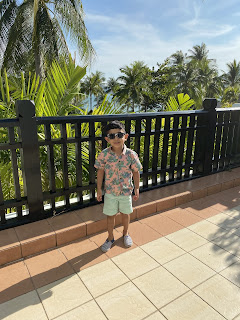 👦 took a lot longer to potty train around 2-4 weeks and he did regress too once he had got the hang of it at around 6 weeks. However 👧 was a lot faster, she got it pretty much on the first day and was completely potty trained before the week was over, with no regressing back, she even went on holiday a few weeks later with an eight hour time difference and did great. I used the same method with both of them, but obviously was much more confident as a parent doing it second time around.

So after having a weekend at home, or given the current coronavirus a few weeks at home you will feel ready to go on your first outing with no nappy. It’s quite scary....but like most things it’s probably is as parents that are more worried than the kids.
Take lots of spare clothes and a portable toilet seat. With 👦 we also had a portable potty for long car journeys but never ended up using it.
You can also buy a waterproof liner for your car seat for any short journeys too, just in case.
Do the same as you would at home, remind them often and even before this virus existed make sure they wash their hands properly as public toilets can be nasty with kids who love to touch everything in them.
Just ask my husband who wants got his leg tickled with a toilet cleaner brush by 👦 in the hospital toilet whilst I was having my 20 weeks scan. 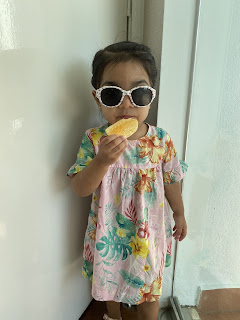 I always use pull ups on aeroplanes until they are around 3/4 and fully fully potty trained, as even though they might be more than capable of telling you they need to go in plenty of time, you can’t always get to the toilet, seat belt sign, a big queue or during a night flight and time difference they maybe asleep for a longer time than expected. 👧 did a 14.5 hour flight only a few weeks after she potty trained so I was slightly worried but she was great and told me each and every time. Her pull up was always dry and I explained that I know that she is a big girl now but sometimes on aeroplanes and airports we cannot just go toilet like we want to when at home.

Once on holiday, I try to take two portable toilet seats when they are younger, one to keep in a rucksack for when out and about and one in the hotel room, sometimes hotels provide these too but I always like to be prepared.

One of the best things about no nappies on holiday is not having to change sandy wet nappies, which I think is the worst ever, and also so much more space in your suitcase.

I took extra outfits this time and a few swim nappies just in case, but 👧 was great on holiday and it was lovely for her to be able to not wear nappies in the heat. We just have to practise sitting more lady like in dresses now that she is not wearing a nappy cover under them lol.

My packing lists have an older and younger toddler version and the main difference between these are being potty trained or not.

Another thing that I find handy when visiting new places, hotels and restaurants is to make a note of the closest toilet when you arrive. Sometimes for example by the pool the closest toilet maybe hidden away, this saves a panic when they ask and time is critical.

I make up these baskets and keep them near each toilet, for both my ease and also for the kids. They contain: 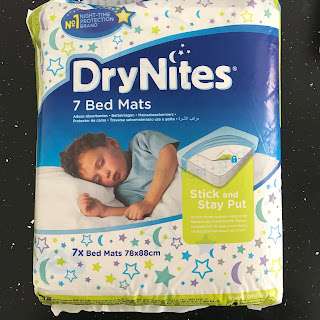 Making it easy to clean up any messes and also entertain your little ones while on the toilet. 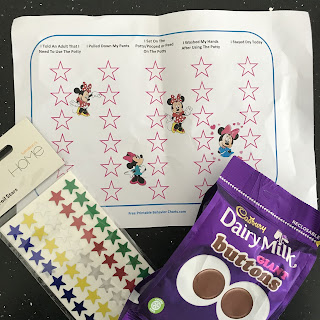