Earlier this year we were lucky enough to travel to Kenya to enjoy a surprise sixtieth Birthday along with a lot of my extended family, a total of sixteen of us all travelled over from London to meet family in Nairobi. It was an epic adventure with lots of great memories made, a trip we will all remember for a lifetime. In terms of food it was also epic, a lot of the food I have grown up with has a lot of african influences as there is no where better in the world to enjoy this type of food. I hope you all enjoy reading through our fabulous journey through a small part of Kenya.

13 of us all flew out together on an evening flight from London Heathrow. Our first meal of the holiday started with the obligatory airport stop at the pub The Bridge. Luckily they were able to seat all of us very quickly and overall the food was tasty, in particular the nacho starters and the chocolate brownie desert.

This was our first time flying on Emirates with the Bub, and I cannot say I was very impressed. Previously we have always flown with British Airways, both to Japan and also our first ever flight as a family of three to Mauritius. Firstly I really like the option from British Airways to have a seat or a bassinet, great for anyone who flies with a baby over four months old, something Emirates do not offer but the main issue I had with the flight was the lack of understanding from staff for those travelling with an infant. One example of this was during mealtimes, BA on both flights we took seemed to understand that if one parent was busy looking after the baby then the other parent could eat before swapping over and they always offered to keep our tray aside and warm. Emirates did not and tried to hand me a tray of food with a sleeping toddler on my lap, after explaining I would eat later on a few minutes later they again tried to again serve me hot tea and coffee. We fly a lot and previously have always been impressed by Emirates but this time it seemed all of their extra such as hot towels, cutlery, snacks etc did not make up for the general lack of customer service, especially from an airline which projects itself as a luxury one. The food again was nothing amazing, not that plane food ever is but it was all pretty bland, wish I had gone for the kids meal.
The best thing about flying with them was the kids packs they handed out, each flight Bubs got a different animal rucksack containing a blanket, very useful for the plane, pushchair and nap times. 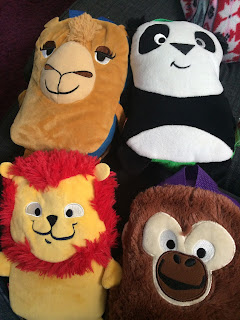 After our first flight we arrived into Dubai airport for a short stop-over with a quick snack stop at Macdonalds for a happy meal ( for me more than Bubs), we boarded the second leg of the journey.

The second flight actually flew by really quickly, its always a worry when you have a non-direct flight that the second leg will drag on but it was a quick 5 hours that we passed by watching films whilst the Bubs slept. We have been really lucky that he seems to have inherited our travel bug gene and does fine with flying (touchwood it continues).

We landed into Nairobi easy afternoon and everyone was really glad to have finally arrived. As you can imagine trying to organise a trip for sixteen people is not easy, its also not something we get to do often get the chance to do since my family run their own business together and logistically for all the directs to be off at the same time took a lot of behind the scenes meticulous planning. A few weeks before our trip we had also just had a family wedding adding to the crazy schedule before hand so I do not think until everyone actually landed and was in the terminal building that it hits us all that we were finally all there. Both my parents and uncles were born in Nairobi so for them it was a rare opportunity to go back and visit all together.

Like the majority of countries ( UK included) we were greeted with very large immigration queues. Using the international sign of a sleeping baby in my arms we skipped these queues by joining the delegates and cabin crew line, trust me it is much easier to wait on a bench with 10kg baby than standing up.

Now when it comes to packing I have improved at only taking the essentials, one way is by planning each days outfits to avoid taking excess clothes. However for our 10 day trip to Kenya I still managed to fill five suitcases between the three of us. I had all your essentials in there - baby nappies, milk cartoons, a portable highchair and wellingtons. In hindsight I really did not need to bring so much, pampers are sold in the supermarkets over there and all the restaurants and hotels we visited had high chairs. My point about luggage here though is that between the large group we had around 20-25 suitcases between us, something which quickly drew the attention of the helpful 'airport staff' hanging around near baggage reclaim. They were very quick to approach us to ensure we have a smooth passage through customs but were soon dismissed with the use of a few wise words in Swahili, but just to be aware of when travelling into Nairobi.

Once we exited the airport we saw a big friendly face holding up the banner welcoming us to Big Jo's 60th Birthday Bash. 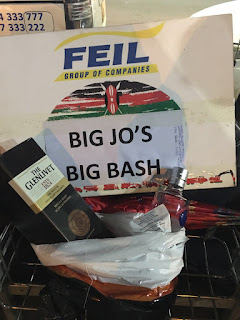 It was time to get this holiday and party started!!!

For our first night in Nairobi we were staying at the Villa Rosa Kempinski, a hotel in the city centre around 20km away from the airport.


We left Nairobi around 4pm and did not pull into our hotel until around 8pm, it took nearly the same amount of time to drive from the airport as our flight from Dubai. Luckily Bubs slept for most of this journey and I was also sitting in the car in with all the snacks. The reason for the delay was due to the monsoon rains starting just as we pulled out of the airport causing all the roads to quickly flood combined with the evening rush hour. 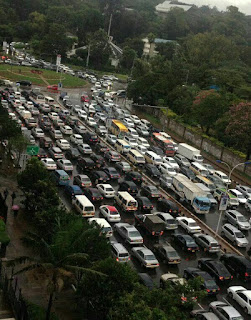 It wasn't the ideal start but as we pulled into the sanctuary of the Villa Rosa entrance we were certainly glad to be there. This was a fabulous hotel in terms of decor, ambiance and service from the staff. They were able to fulfil my request to have all 7 rooms next to each other. That evening we met up with the rest of the family who had traveled over earlier and after a quick refresh in our beautifully decorated rooms we all met up for our first giant family dinner of the holiday at Lucca, the Italian restaurant in our hotel.

The food was good, we ordered a variety of both starters and mains, my favourite being the pizzas and risotto I ordered for Bubs.
All the guys got started straight away with the 'Nyama Choma' or grilled meats by all ordering the same dish of lamb chops. Me and Bubs retired after dinner to our huge comfy bed before our early start the next morning. 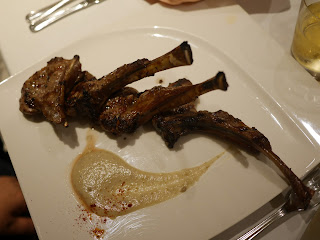 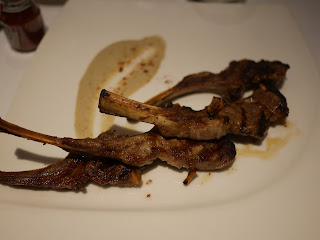 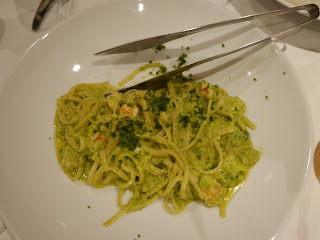 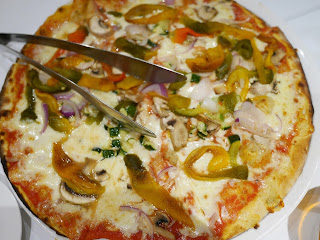 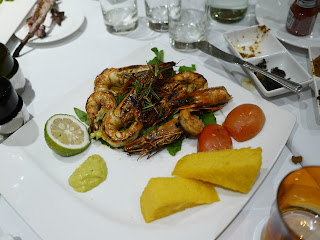 The rest of the party crew carried on with drinks and shisha at The Balcony bar, which from the stories I heard the next morning was also a lovely part to the hotel.

Overall I was pleased with the hotel, although I felt the checkin took longer than necciarsly they made up for this with exceptional service in other parts.

Part 2 - Narok and the Big Party